Thank goodness for libraries.  As part of my research into all things ‘sixties’ I have tracked down a fascinating book.  ‘The Neophiliacs’ was written by Christopher Booker and published in 1969.  It turns out that it is now out of print and Amazon are asking over £100 for a copy!  So, you can imagine my delight when my wonderful library managed to retrieve a copy from their ‘rare and out-of-print’ books.

I am only a few chapters in, but have already been intrigued by much of Booker’s insight into the significance of what he calls in the book’s sub-title, ‘A study of the revolution in English life in the fifties and sixties’.

Wanting to find out more about Christopher Booker, I did what many do nowadays in these times of instant ‘information’ – I Googled him.  I discovered that back in 1961 he became the founder and one of the early editors of the satirical magazine ‘Private Eye’.  He was the first jazz critic for the Sunday and Daily Telegraph and continued as a weekly columnist for the Telegraph right up to 2019, when he finally retired at the age of 81.  As well as ‘The Neophiliacs’ Booker has written a number of books studying British society, as well as commenting on wider issues, such as the European Union.  Some of his views regarding climate change, health issues, such as the dangers of asbestos and cigarettes, have been controversial; he would appear to be someone who is not afraid to say what he thinks, even if it means going against the grain.

However, as much as Mr Booker and I do not see eye-to-eye over such issues as climate change, his insight into the long-term implications of social change during the 1950s and 1960 have really struck a chord with me.

This paragraph in particular made me sit up and think: 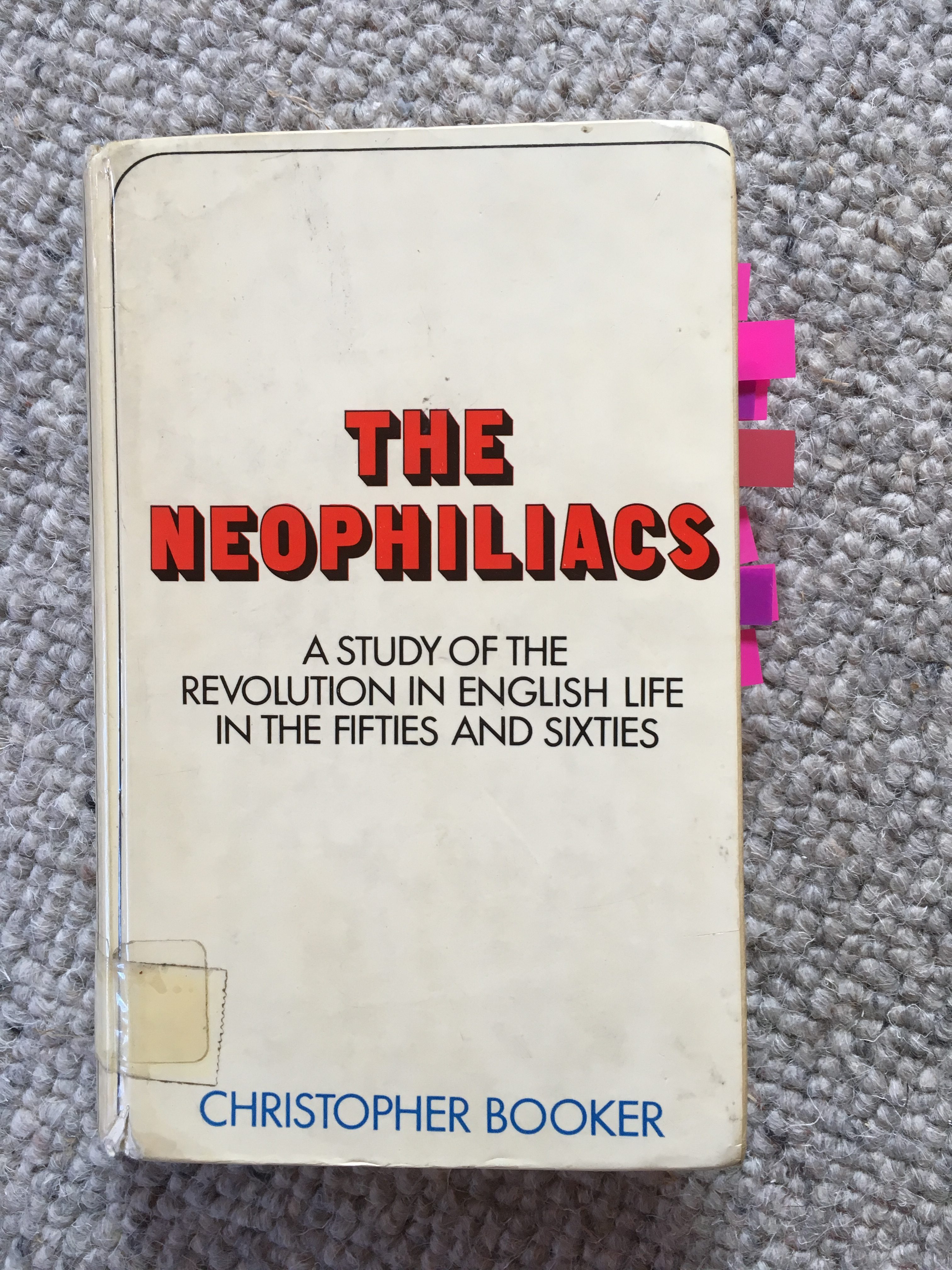 ‘…the twentieth century has also provided two other factors to aggravate and to feed the general neurosis; the first being the image-conveying apparatus of films, radio, television, advertising, mass-circulation newspapers and magazines; the second the feverishly increased pace of life, from communications and transport to the bewildering speed of change and innovation, all of which has created a profound subconscious restlessness which neurotically demands to be assuaged by more speed and more change of every kind.’

THE NEOPHILIACS: A STUDY OF THE REVOLUTION IN ENGLISH LIFE IN THE FIFTIES AND SIXTIES BY CHRISTOPHER BOOKER

Of course, we know now in 2019 that the desire for speed is all around us – from the need for ever faster Broadband, to high-speed rail links and non-stop Transatlantic flights.  Some will point out that the changes started when the Industrial Revolution resulted in horse-drawn carriages and ploughs being replaced with the engine and the first railways.  Social change is ongoing, but it does appear that some eras are more significant than others.

What is fascinating is to realise that at least sixty or seventy years ago Booker was able to identify ‘restlessness’ as it was happening, knowing that people would need more of the same, on and on until we reach the present day addiction to online and social media, where we constantly flick through images to gratify our seemingly non-existent attention span.

Booker identifies how the word ‘image’ … ‘floated into general consciousness…’ around 1958-59.  He suggests that the word was used in a way it had never been used before, to describe things, ‘…such as the appeal of television personalities, or different models of motor cars…the visual imagery of eye-catching clothes, the bright lights of the new super-markets, the glossy packaging of food.’

Now we can’t imagine a world without ‘images’ – but here Booker reminds us that for many who grew up during the 1930s and 1940s the concept of ‘interior design’ or ‘fashion’ might have been shared by the wealthy, but for everyone else it was as fanciful as man walking on the moon.

I’m certain that as I read on through Booker’s study of these two iconic decades I will come across more statements that capture my attention – and when I do I will share them with you!

This site uses Akismet to reduce spam. Learn how your comment data is processed.